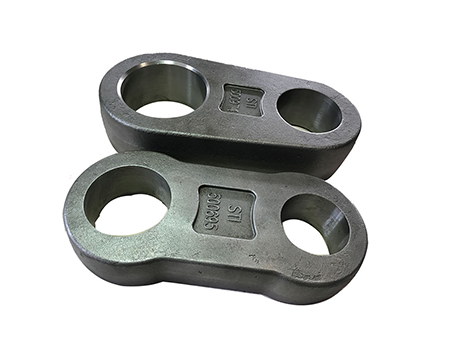 Molds made of sand are relatively cheap, and sufficiently refractory even for steel foundry use. In addition to the sand, a suitable bonding agent (usually clay) is mixed or occurs with the sand. The mixture is moistened, typically with water, but sometimes with other substances, to develop the strength and plasticity of the clay and to make the aggregate suitable for molding. The sand is typically contained in a system of frames or mold boxes known as a flask. The mold cavities and gate system are created by compacting the sand around models called patterns, by carving directly into the sand, or by 3D printing.

These castings are made using sand molds formed from "wet" sand which contains water and organic bonding compounds, typically referred to as clay.[4] The name "Green Sand" comes from the fact that the sand mold is not "set", it is still in the "green" or uncured state even when the metal is poured in the mould. Green sand is not green in color, but "green" in the sense that it is used in a wet state (akin to green wood). Contrary to what the name suggests, "green sand" is not a type of sand on its own (that is, not greensand in the geologic sense), but is rather a mixture of:

silica sand (SiO2), chromite sand (FeCr2O4), or zircon sand (ZrSiO4), 75 to 85%, sometimes with a proportion of olivine, staurolite, or graphite.

There are many recipes for the proportion of clay, but they all strike different balances between moldability, surface finish, and ability of the hot molten metal to degas. Coal, typically referred to in foundries as sea-coal, which is present at a ratio of less than 5%, partially combusts in the presence of the molten metal, leading to offgassing of organic vapors. Green sand casting for non-ferrous metals does not use coal additives, since the CO created does not prevent oxidation. Green sand for aluminum typically uses olivine sand (a mixture of the minerals forsterite and fayalite, which is made by crushing dunite rock).